Once you start streaming on Twitch, you will easily complete all of the tasks on your own.

However, as your audience grows, you will probably have to start delegating, and that’s when Twitch bots step in.

You won’t have to worry about moderating your viewers, and have more time to tackle other problems.

If you aren’t sure which Twitch bot to get, then check out this article about the best Twitch bots. 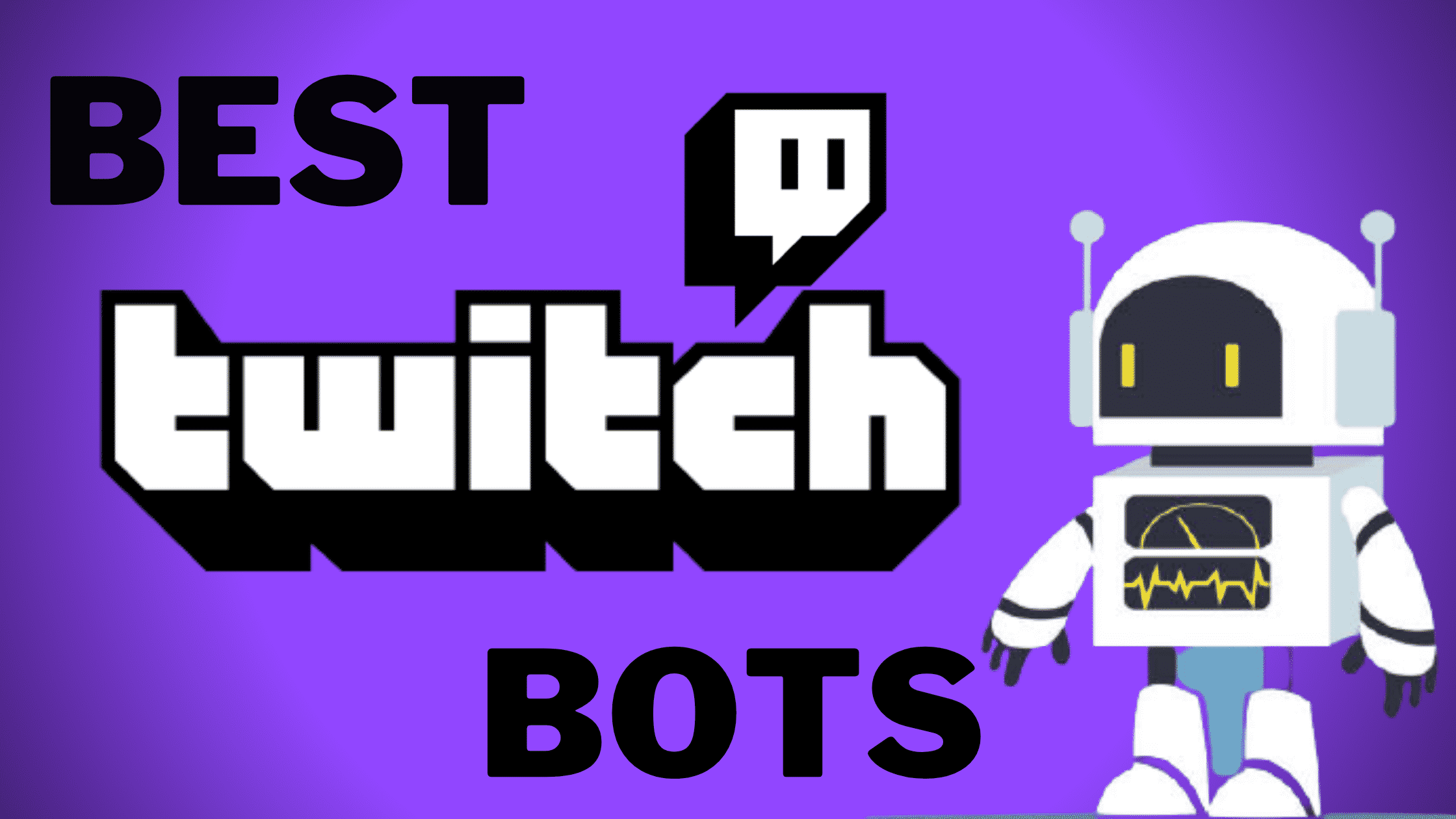 This bot is not only one of the best Twitch chatbots, but it also works on Youtube and Facebook, so if you want to switch to gaming on these platforms, you won’t have to look for another chatbot.

StreamElements is quite beginner-friendly, thanks to 30 pre-written commands.

It effectively blocks the spam messages and helps you with moderating the chat rooms. Also, StreamElements features a built-in timer, which comes in handy for banning when someone is acting inappropriately.

The one feature that many think they do not need, but end up using often is Modules, especially for Twitter. You can incorporate twits and encourage discussion among viewers.

Furthermore, it enables games such as roulette and bingo that will entertain your audience.

When it comes to income, you can earn it in a few different ways. Firstly, there are bits – users purchase and send them to broadcasters and streamers, and receive a badge in return.

Also, there are donations and subscriptions.

You may know Streamlabs by its former name – Ankhbot.

Just as StreamElements, Streamlabs can be used for other gaming outside Twitch, so you can switch between different platforms without changing the bot.

There are two versions of Streamlabs – the one that can be downloaded to PC and the cloud.

The first version is better since it has more features and functions.

This platform is one of the best Twitch chat bots because it allows python scripting as well as the use of macros and special counters. All of the tech geeks can play with the bot and have fun while setting it up and using it later.

When it comes to chat management, it has a timer, recognizes spam messages and deletes them automatically, and can limit access to chat rooms when someone is violating rules.

Another amazing feature of Streamlabs is quotes – your viewers can simply type in one of your quotes they like and it will be added to the list of favorite quotes.

You as the content creator can create a queue, and add sound effects, so viewers have a unique experience while watching your streams.

Other engagement tools are polls and chat alerts.

If you want additional features, you can go for Streamlabs Prime and enjoy the extra 40 functions.

Keep in mind that setting up Streamlabs is a bit more complicated.

Many streamers state that Nightbot is the best Twitch bot ever!

Well, it does give plenty of versatility and some unique features that will make your live streams even more entertaining.

Nightbot is compatible with Twitch and YouTube, and it can be used on both PC and Mac, so everyone has access to it.

Since it is cloud-hosted, whatever you need to manage, you can easily do it via browser or your console.

Speaking of interface and usability, it is one of the most user-friendly bots available for free.

Even beginners can learn how to use some of its features, and as time passes by, and they get more comfortable with the bot, they will easily grasp how to create some commands on their own.

Customizing Nightbot to meet your needs will improve the quality of your streams and chat rooms.

For example, you can set up message replies to some of the asked questions, or just send any message while you are still streaming.

If someone is spamming the chat with links, curses, or just unnecessary information in general, with a custom command, you are able to protect your followers and viewers.

Once you are done with live streaming, check out the previous chat logs. All of your regular viewers will be listed there, and you can hide spam from them.

Also, they can have extra access thanks to a few customized commands.

If your viewers enjoy music in your live streams, they can have access to SoundCloud and YouTube playlists and pick the songs that will be featured.

Nightbot is also storing other information about viewers – you can see whether someone is a regular viewer, and if they are, you can see how long they have been a follower.

Now, let’s talk about a chatbot that is currently only compatible with Twitch.

This one has many unique features and allows you to communicate with your viewers easily, but keep in mind that it doesn’t suit everyone.

Beginners might struggle a bit while setting it up, or using custom commands. This is a chatbot for more experienced streamers that already know something about Twitch bots.

So, what makes Wizebot so great?

Well, firstly, it gives you many options – you can interact with both subscribers and non-subscribers. The first can enjoy many perks, while the latter might become subscribers after participating in some games.

You can add one of the most famous survival games, 7 Ways to Die, and users can attend the events after subscribing to your channel.

When it comes to subscribers, they can receive notifications from your channel, or request songs for live-streams.

Also, any giveaway organized on your channel will be available only to the subscribers.

Other features this bot offers are warnings, timers, virtual currencies, and Twitter posts.

This is another bot compatible only to Twitch, and one with the most unique feature.

Stay Hydrated is not looking after your chat, and it doesn’t manage the chat at all.

There aren’t any spam blocks, warnings, timers, or custom commands.

This bot was created to keep track of your health and wellbeing.

Since many streamers, after playing for several hours, forget to drink or eat, this bot is there to remind them to take care of themselves.

During the stream, you will occasionally receive a notification to drink water.

At first, this feature might sound silly, but it could help you gain some healthy life habits.

Your subscribers can receive reminders as well. All they have to do is spend some loyalty points, and once a certain amount is spent, they will start getting notifications.

Setting up this bot is super easy – all you have to do is write ‘!hydrate {Twitch username}’, and the bot will be activated.

Moobot is probably the most user-friendly Twitch bot out of all mentioned.

Beginners aren’t so familiar with the Twitch lingo at first, so they do not understand some commands and aren’t sure how to customize them to fit their needs.

However, with Moobot you can easily learn the basics and then continue using the bot as your knowledge expands.

Once you start using it, you will see how simple the interface is and how easy it is to navigate it.

It is cloud-based and entirely free. One of the biggest advantages is privacy – among all mentioned, streamers and broadcasters trust Moobot the most, so consider it safe to use.

When it comes to features, they are quite basic – there aren’t many unique ones that other chatbots do not have.

Many Moobot commands can be customized, and most of them are automated, so you won’t spend too much attention on the bot.

It is great for communicating with subscribers and viewers – there are song requests, reduction of spam, timers, and custom messages.

Also, you can create polls, and later share the results in form of pie charts.

Tech geeks are behind the success of PhantomBot. This Twitch chatbot is open-source, and it is constantly improving thanks to many users.

Since it is a bit advanced and the interface is not as simple, it is not recommended for beginners.

However, if you have already used chatbots, know about creating custom commands, then you will enjoy using PhantomBot.

This is one of the bots with the most features.

As a channel owner, you can set the permission level, determine which viewers have more access, and create many commands on your own. If you do not like the name of a particular command, you can change it, so it is easier to find later.

Also, you can send notifications to subscribers.

PhantomBot is another chatbot that allows integration of Twitter posts, and it enables linking Discord account as well.

Your viewers can be a part of the gambling system simply by using loyalty points. They can also play mini-games, or kill each other virtually in some funny ways.

Last but not least is Coebot.

This chatbot is suitable for both beginners and advanced streamers.

There are many already written commands, so if you do not like writing them on your own, you can just use the given ones and still create high-quality content for your viewers.

Of course, if scripting is one of the things you enjoy doing, then you can write some commands on your own, or even use this chatbot to practice creating commands.

As far as interactive features go, there are many basic ones such as prevent spam, banning, or notifications.

Your viewers can participate in games, such as magic 8-ball, get access to definitions in the urban dictionary, throw things at each other, or hug.

Some features, random numbers, for example, can be great for giveaways.

How to Choose the Right Twitch Bot?

As you will see, different Twitch bots offer different functions.

Before you add any bot, determine the tasks you want to delegate.

Then, after learning more about each bot, you will know which one suits you the most.

The bot is there to meet your needs, so it is often hard to say which is the best bot for Twitch since the needs of streams are quite individual.

The one thing you should keep in mind is that the bot doesn’t have a brain and doesn’t do any thinking, so the quality of the bot depends on the program, and the person creating it.

Once you’ve determined which chatbot meets your needs, it is time to add it or connect it with your Twitch profile.

Every bot has its on-screen instructions for adding, but here are some general steps:

The process is completed once you are redirected to the dashboard.

Can I get Nightbot for free?

Yes, Nightbot is entirely free to link with Twitch and use.

Will the Twitch bot count as a viewer?

What chat rules should I add?

It is best to keep them simple. Anyone that is bullying another viewer or posting sarcastic comments should be banned.

Which bot is the most popular?

Most streamers use either Streamlabs (29%) or StreamElements (44%).

We are here to help you grow your sub and followers list with insightful guides on how to stream.