Best Point And Shoot Camera – Top 6 For Every Budget!

Point-and-shoot cameras are one of the most popular types of cameras that can be used by anyone who knows how to click buttons on them. Plus, they are super easy to find – walk into a tech store, and there will be hundred different types.

But which one is the best point and shoot camera? I think that would be Panasonic LUMIX LX10 because of its outstanding resolution, optical zoom, and 4k video recording.

I have also tested different models and created a list to help you find the one that will suit your needs. Let’s begin! 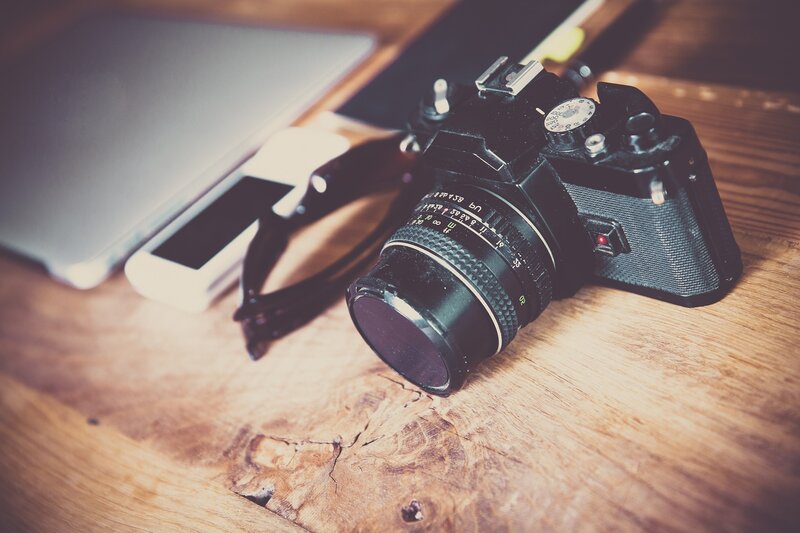 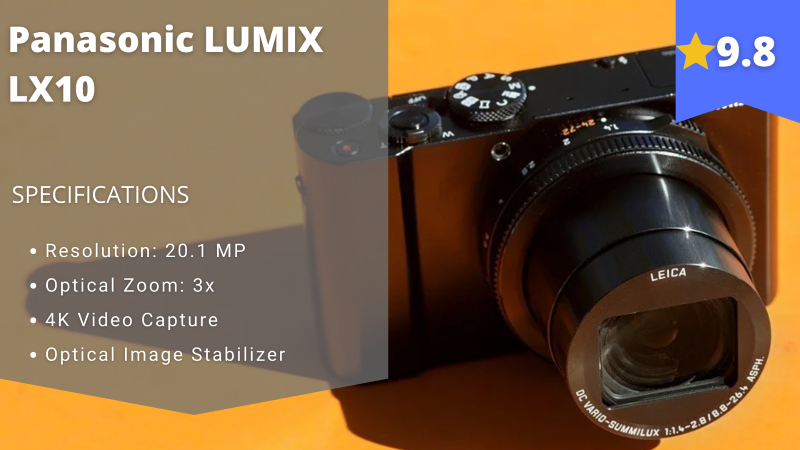 There are numerous things that I like about this camera: 4K video capture, which is a must in my book, great resolution, optical zoom, and Leica lens, which came through when I was filming in low light.

Plus, it’s really easy to use (even beginners would quickly figure out how to use it to get the most out of it), and all of the modes give you many shooting options.

Panasonic Lumix digital camera is the best point and shoot camera that has been released, and it is known for its excellent 20-megapixel resolution.

It has Leica lend aimed at professionals and will provide you with a clear, high-quality picture even in low light or at bad angles.

Even though it is not a professional camera you would use for photoshoots or video filming, it has excellent close-up options, which means you will be able to zoom into pretty much anything.

What makes it stand out is the high-speed focus that will provide you with image stability, which is very important for a clear picture, especially if you are shooting at night.

The Lumix digital camera will also guarantee you 4k resolutions at all times, so you can be sure that even action scenes will look great.

Even though this is one of the more expensive point-and-shoot cameras, it is worth it, and this is the best product that you can find in this niche. 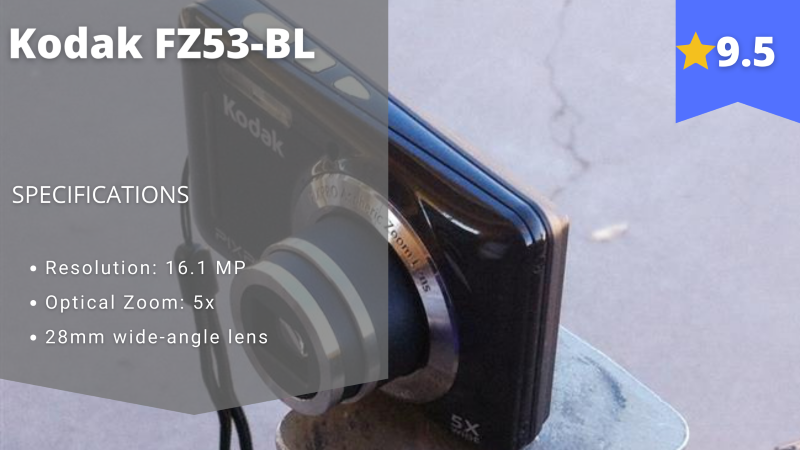 I tested several settings and modes, and even with just 5X zoom and 16.1 MP, you can get a high-quality video.

Considering its specs, I would recommend it to live streamers since you don’t have to shoot things from a far distance. Also, it’s quite cheap, and considering the price, it does a superb job.

The Kodak BL point-and-shoot camera is pretty simple, and it was one of the first cameras that I have tested.

It has a rechargeable battery and 28m wide angles to help you shoot whatever way you want to while guaranteeing a good quality picture.

There is also a 5x optical zoom, and even though it isn’t the largest zoom, it is enough to create a good picture at any distance.

You will get a 720p video, which isn’t the highest resolution, but there are plenty of shooting modes that allow you to create a better picture.

With that being said, you will have to take time to learn how each mode works to get the most out of it.

However, this is one of the most affordable point-and-shoot cameras, so if you are looking for the cheapest option at the moment, this is the right one for you. 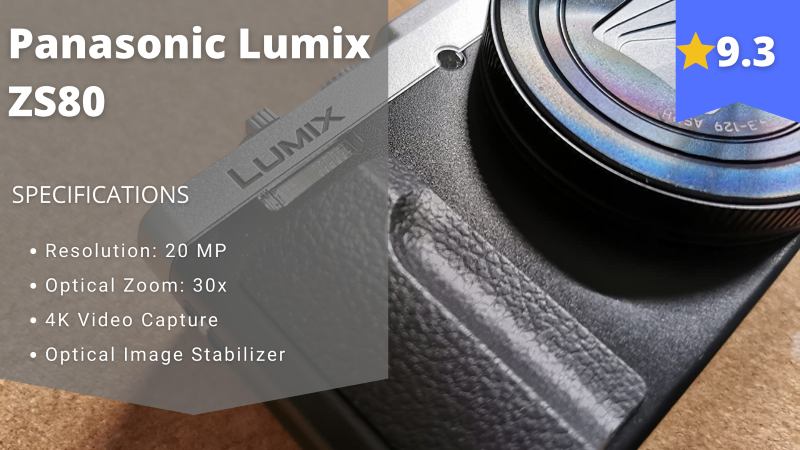 I started using the camera without reading the manual because I didn’t want to confuse myself with all of the modes, which is pretty intuitive. The flip-out screen makes adjusting the focus, modes, and other settings super easy.

What won me over was the quality of the 4K video: plenty of detail and great resolution. I would like it more if I could bring it up to 60 FPS, but even 30 FPS at 4K looks fantastic!

This is also one of the Lumix point-and-shoot cameras produced by Panasonic, and it is known for its fantastic travel zoom lens that is great for shooting landscapes.

It has a Leica Elmar lens known for ultra-wide angles that will provide you with a high-quality picture wherever it is taken.

The photos and videos with this point-and-shoot camera will always be in 4K, and you will also have an optical image stabilizer in your hand that will allow you to control the quality of the picture.

It is one of the most affordable cameras of this sort, but even though it has a 20 MP camera, its pictures don’t seem clear enough, and it doesn’t perform as well as it should.

However, it is a good option for beginners and those who use it just for personal purposes, and it is pretty cheap. 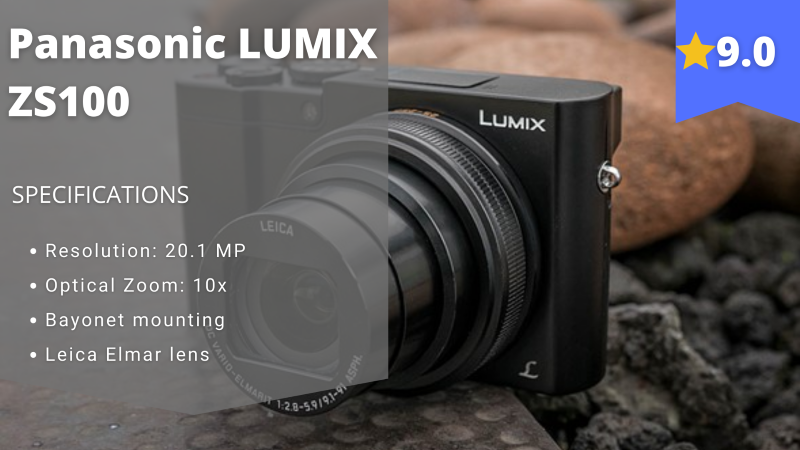 Panasonic LUMIX ZS100 is quite similar to the previous ZS model, but with just a bit higher resolution, which I could tell easily from comparing the images and videos. My images looked more vibrant and clear.

However, it doesn’t have such powerful zoom, which I think, in many cases, is more important than resolution.

This is also one of the popular Panasonic cameras. I decided to try it out because of one of its modes that apparently creates great pics even during the night.

The video capture is 4K, but sometimes you may struggle with blur, and you can’t expect to have the perfect tilt correction at all times.

It does have advanced image processing, and it will provide you with speedy signal processing, especially when you are filming videos.

While the visibility on this device is improved, it provides you with amazing technology that will allow you to capture a picture right now, but go back to it later and refocus if you need it.

There is also a light composition that will add great highlights and visibility even to the darkest pics, so you don’t have to worry about it too much.

However, it is a bit more expensive than most point-and-shoot cameras out there, so you may not want to invest in it. 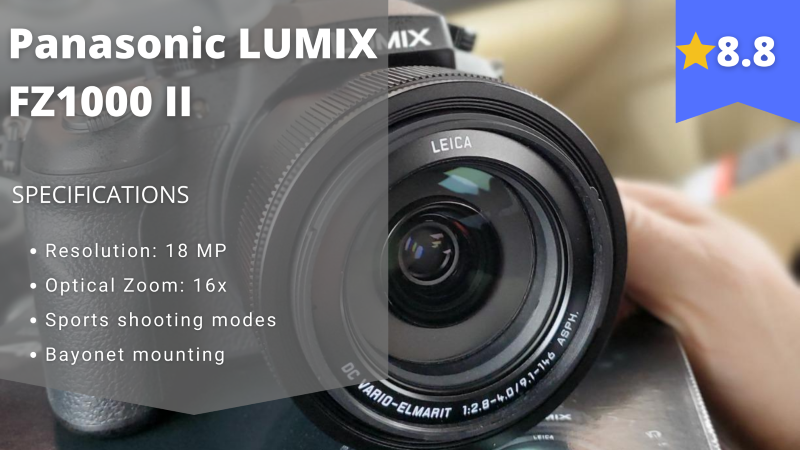 In my opinion, this is the camera made for recording high-quality videos. I had tested it both inside, when live streaming, and outside, for a few vlogs, and the videos were clear and smooth in both cases. Plus, thanks to the image stabilizer, I knew my viewers wouldn’t get dizzy while watching my clips.

But it is one of the more expensive cameras. Therefore, it’s not for everybody. I recommend it to professionals who know how to get the most out of such a powerful camera.

This Panasonic point-and-shoot camera is one of their most expensive products, and since it is not a professional camera, it isn’t the most reasonable purchase you can make.

The Lumix camera is a hybrid camera that has a huge one-inch sensor and excellent video filming capabilities, which is the reason for such a high price.

It belongs to the latest FZ series Panasonic has launched, so it is a camera aimed at professionals who need these sorts of cameras in their daily work.

This camera is also known for having monochrome modes that will help you shoot anywhere and create good highlights and shadows.

If you decide to use this camera, you probably won’t need to edit the photos or videos too much because they will be in perfect resolution. 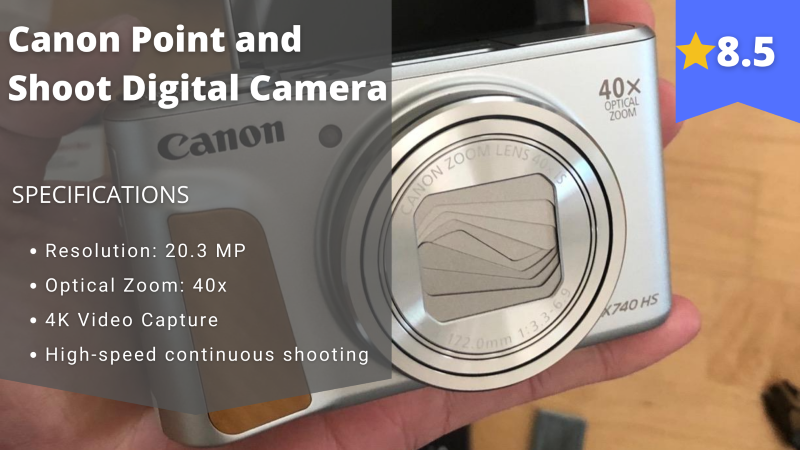 I’m a big fan of DSLR cameras, and this one is almost like a DSLR, except that you don’t have to carry a bunch of lenses with you. Its 40X zoom is why I wanted to test it and buy it.

And it didn’t disappoint! The clarity of faraway objects is amazing, and I liked the zoom framing for locking the zoom. However, when it comes to other features, it’s quite similar to other competitors – not much else to talk about.

Canon cameras are pretty popular in general, and this point-and-shoot camera is one of their best-selling products because it has fantastic zoom and resolution.

The US point-and-shoot camera will allow you to zoom up to 40 times, and it has an optical image stabilizer that will provide you with great colors and make every detail look perfect.

Their optical zoom will provide you with one of the best image stabilizations, even if you compare it to more professional cameras, but the quality is not as high as on them, so you may not be too satisfied with the end result.

Zoom framing assist is also here to help you keep the focus while shooting videos, and while it is pretty good, its resolution is still not that amazing, so don’t expect miracles from it.

It has a slim design, so you will be able to take it wherever you want, but its construction is not that sustainable, so make sure you don’t break it before you have even taken some pics with it.

However, it is one of the most affordable point-and-shoot cameras, so if you don’t have too much money to splurge, it is a great option, and it will provide you with some good pics.

As you can see, all of the best point-and-shoot cameras on my list cater to a specific audience and buyers.

My top three picks are:

I hope you have found the right point and camera and are happy with your purchase.

Stefan is a long-time content creator and one of the Stream Mentor's co-founders. He's a tech geek and a Dota 2 player (not even a good one) who wanted to help others become professional streamers and earn from the comfort of their home.